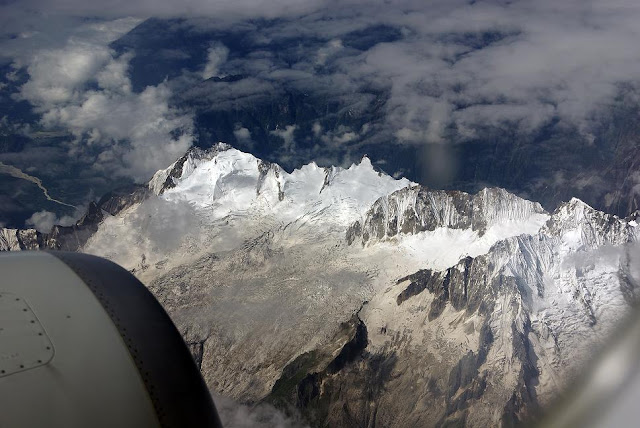 To get to Tibet you must either, fly, take a train, or do what a band of monks did, hike for five months on a pilgrimmage. We chose to fly, which makes the above Tibetan Himalayas.  To my knowledge our airplane was not flying anything less than normal cruising altitude – at least I assume they don't want to fly any closer to these mountains.  So to be this close, the only remaining option is that these mountains are really tall. 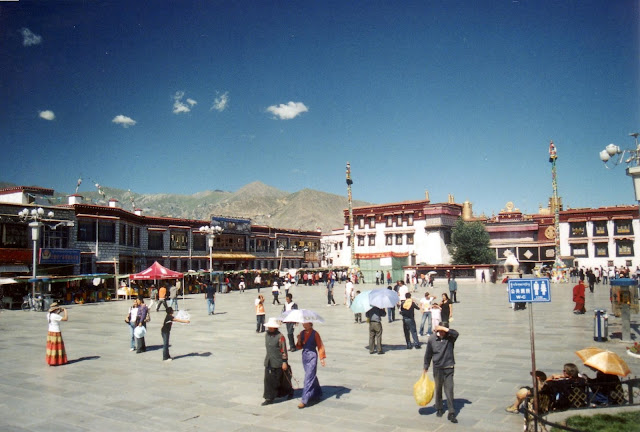 The capital of Tibet is Lhasa, and pictured above is its city square: the Barkhor.  The whitewash building with maroon trim in the background is Tibetan Buddhism's equivalent to Mecca or the Vatican: the Jokhang. 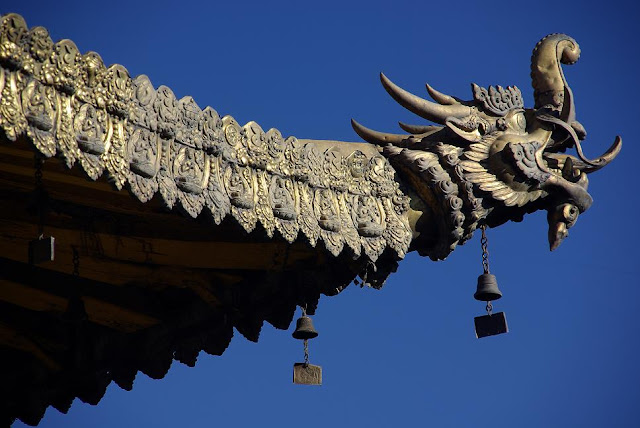 This is a detail of one of the Jokhang's awnings. 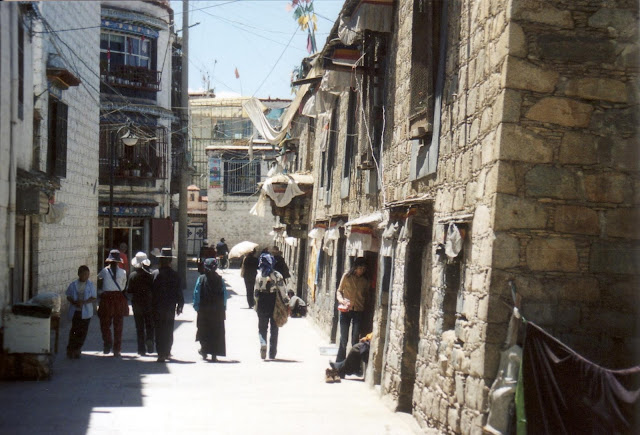 A back street of Lhasa. 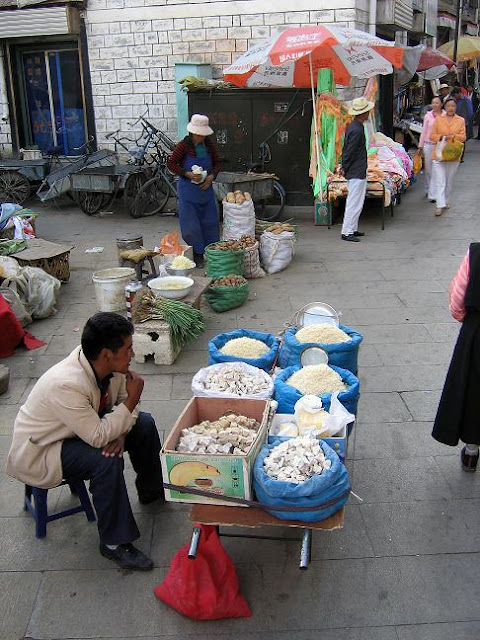 Some of the many street vendors.  This one is selling all varieties of yak cheese. 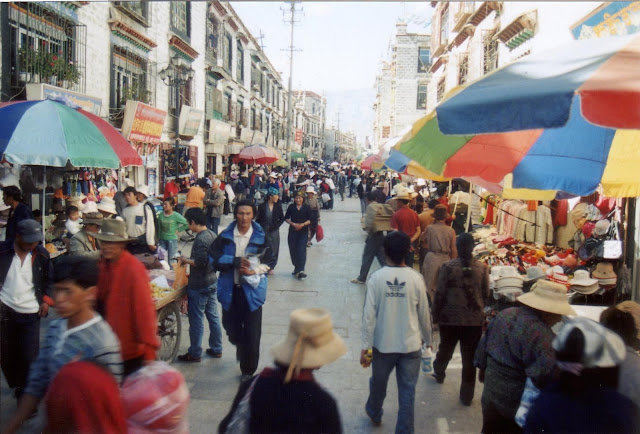 Another of the market streets in the inner city. 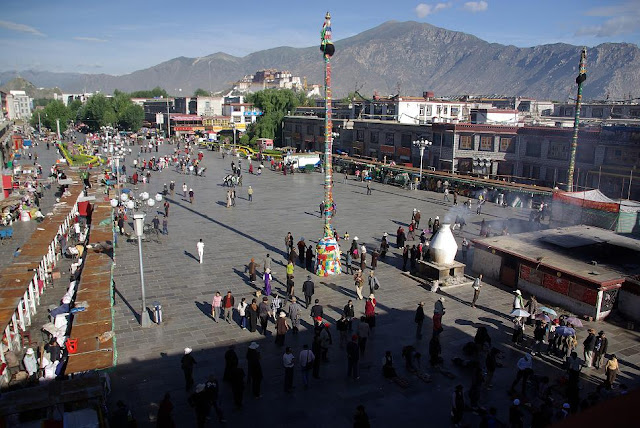 A Different view of the Barkhor.  The two poles are prayer poles and they are wrapped in yak hair and prayer flags.  The white cone is a small oven used to burn sage (it's partner is under renovation).  In the background is the Potala Palace – symbol of Tibet – and the mountains surrounding Lhasa. 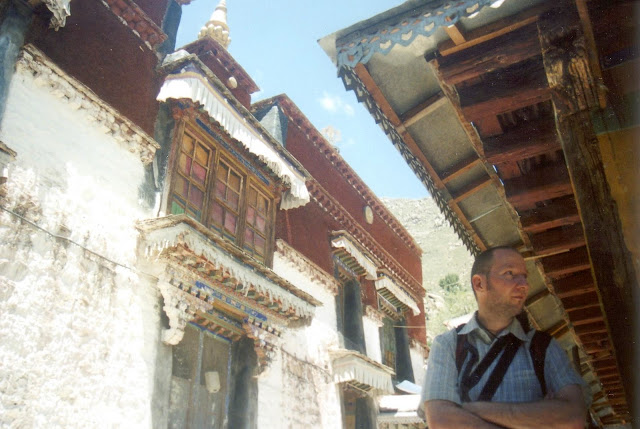 Standing beside one of the side chapels at a monastery called Sera (just outside Lhasa) is my partner in crime during the trip, The Fragrant Fighter.  Aside from handling the roles of chef, jukebox, and chief navigator, he is also responsible for a lot of these photos you're looking at. 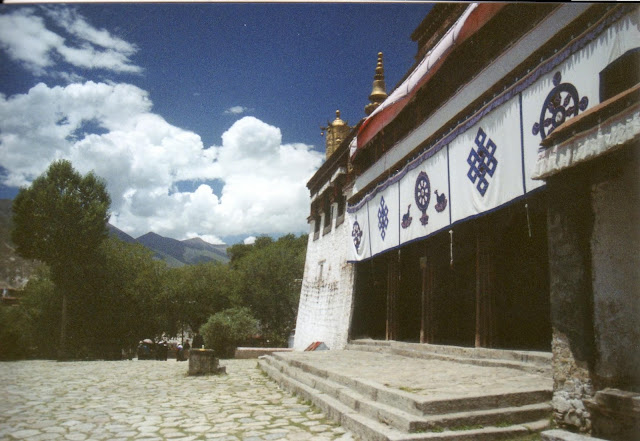 This is the Main Assembly Hall at Sera Monastery. 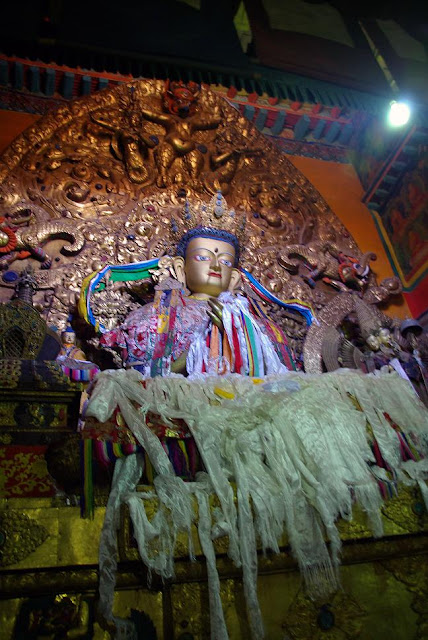 On the outskirts of Lhasa are many monasteries, of which one of the larger is named Drepung.  Above is a photo of one of the gods in the main assembly hall there.  Although it may look small, this statue is as tall as two men (or two taller women!), and with the intricately carved backdrop, is about two floors high in total.  The face is painted with gold and the clothes adorning the statue (or, as my father would say, heathen idol) are made of silk, just as the white scarves draped across its lap are.  Don't ask me who the god is...
Part II up next here...
Posted by Jesse at 9:19 PM