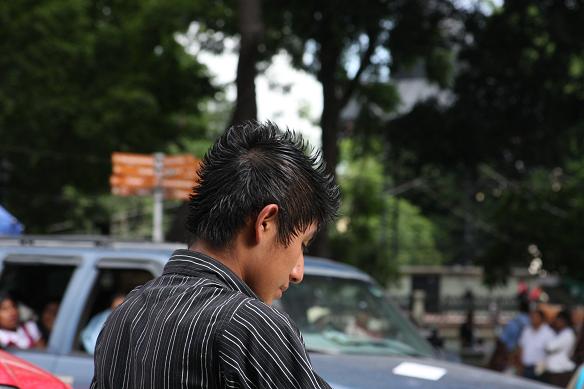 Like internet stock in the 90’s, those who invested in hair gel years ago in Mexico have certainly made a killing by now.  I won’t say that Mexican men are vain; they seem to care about their appearance about the same as American men.  However, when it comes to styling one’s hair, there can be no competition in the world for the amount of time Mexican men spend doing their do.  This boy’s is about middle-of-the-road with regards to effort, shine, and number of spiky points.  Others were much more extreme, needing half a jar… bottle (how is gel sold?) to accomplish the sleek, suave, stegosaurus looks they did.  Unfortunately, no photos.  (Perhaps I’m too polite to laugh at someone as I take their photo?) 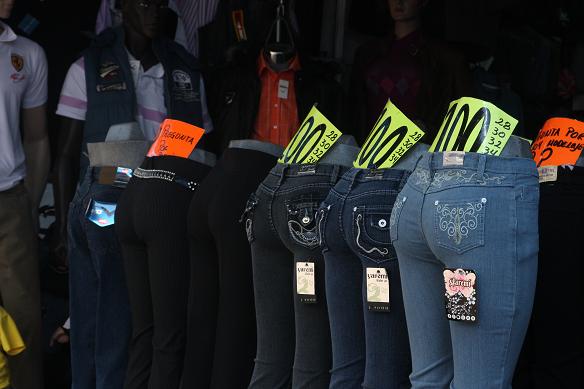 Everybody knows Americans are fat.  But close on their heels are the Mexicans.  And what comes with fat?  Booty jeans!!  We found jeans positioned like this (back to front) for sale all over Mexico. 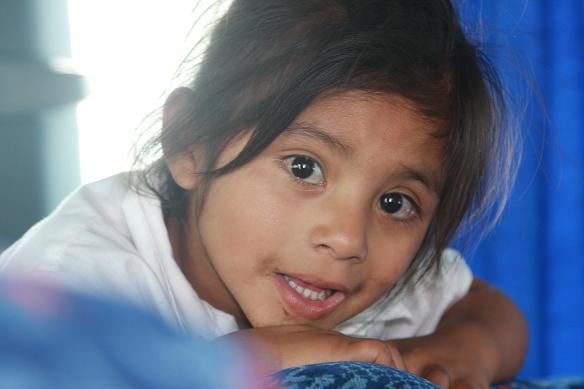 Nothing special, just one cute little girl we travelled with who was quite curious about us.  (Chances she’ll grow up to wear booty jeans: 73%) 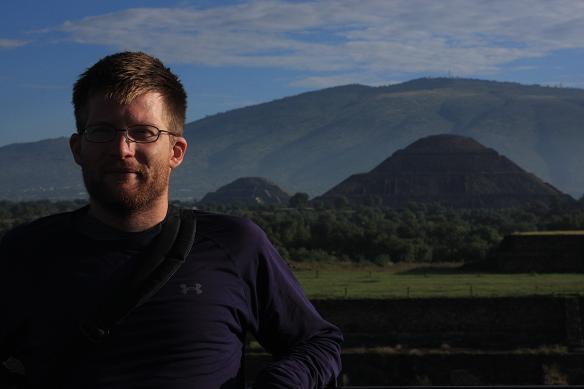 Behind me stand the pyramids of the sun and moon at Teotihucan, the former being the third largest pyramid in the world.  (The second is also in Mexico and the first, of course, in Egypt.) 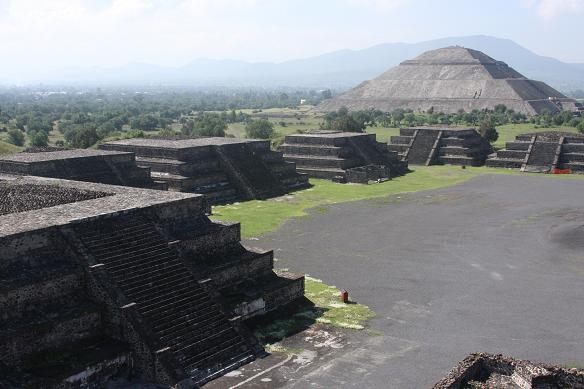 In this photo, we are sitting on the pyramid of the moon looking across to the pyramid of the sun.  Not Mayan, rather Teotihuacan culture, the site was nonetheless awe inspiring.  It was wonderful to let your imagination wander as to the civilization that walked these streets, shopped in these plazas and worshipped at these temples hundreds and hundreds of years ago.  At one time this was the largest city in the Eastern hemisphere. 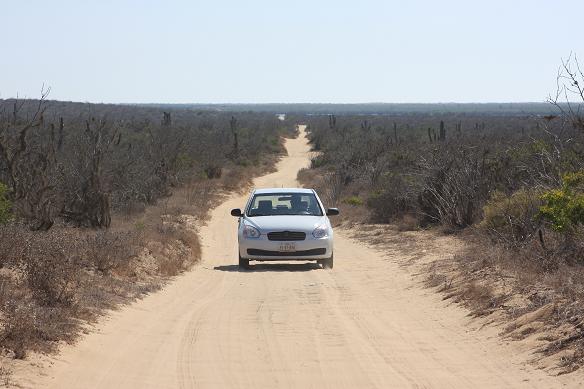 After the ruins we headed to Baja California, the place I wish to return to the most as our time there allowed us to see only the tip of the iceberg.  We rented a car – this car – and drove it for five days around the peninsula, sometimes on paved roads, sometimes on not-so-paved roads like this, and a couple of times on roads the rental company would have killed us for had they known. Action photo!!  (Or at least half-action: no dust being kicked up.) 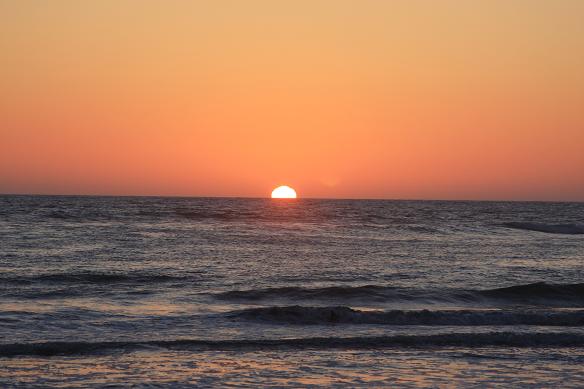 The car was also our home and hearth for a night.  We slept by the Pacific, the setting sun our only friend. 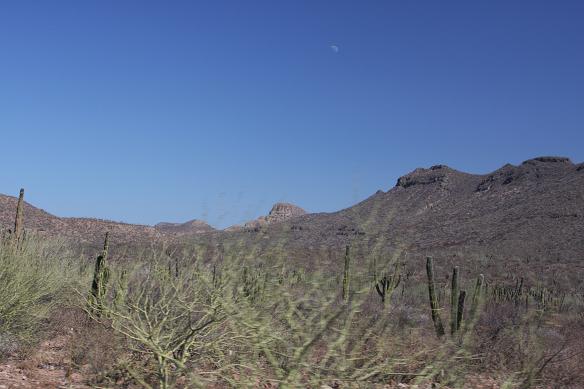 Baja California’s beauty is in its sublime deserts and its crystal clear, midnight blue oceans.  If you don’t like deserts, well, these pictures won’t impress you.  We loved the uniqueness of their visage, the introspection they inspire, and relaxed mood they put you in watching the moon appear above the cacti.  (The white blotch in the sky is a half-moon, couldn’t you tell?!?!?!) 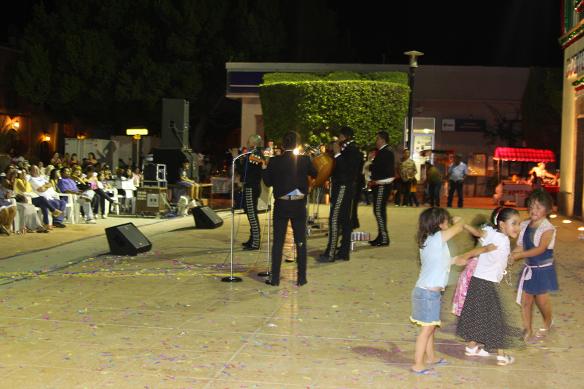 While in the Baja California town of Loreto, we were able to experience the final crescendo of the bicentennial celebration.  There were fireworks, food, flags waiving, dancing, beauty contests, and of course, mariachis.  The festivities went on until the early morning, and these children were there every step of the way, dancing.  The reason these mariachis are not wearing sombreros is because it was soooo hot.  Audience members periodically brought them cold beer and received a song request in return. 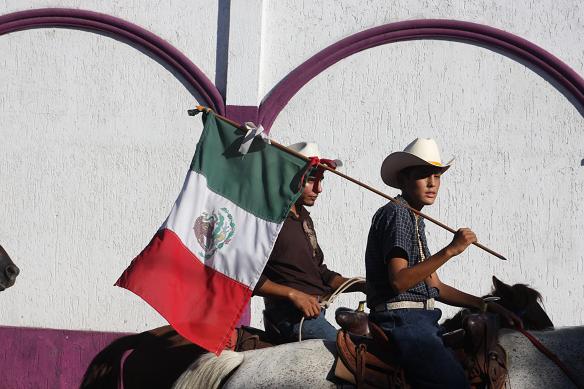 There was of course a parade on Independence Day, and these two young men proudly represented their country on horseback.  (Chances they grow up to own a larger collection of cowboy hats: 100%) 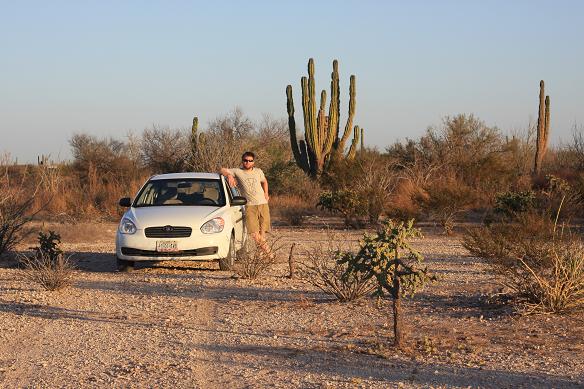 Me looking bad-ass with our rental Dodge Attitude in Baja.  Based on the engine size, I don’t know if the name is worthy… 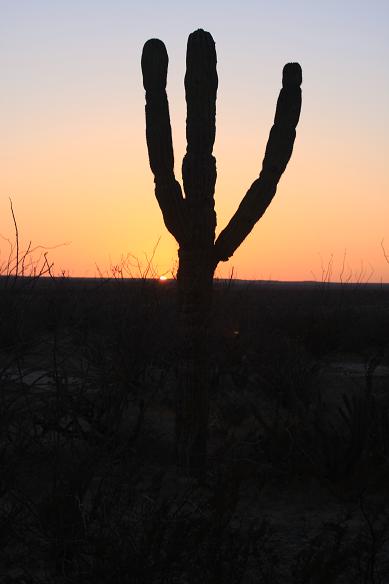 Like the photo in Chichen Itza, this is the obligatory cactus photo from Baja.
End Part II